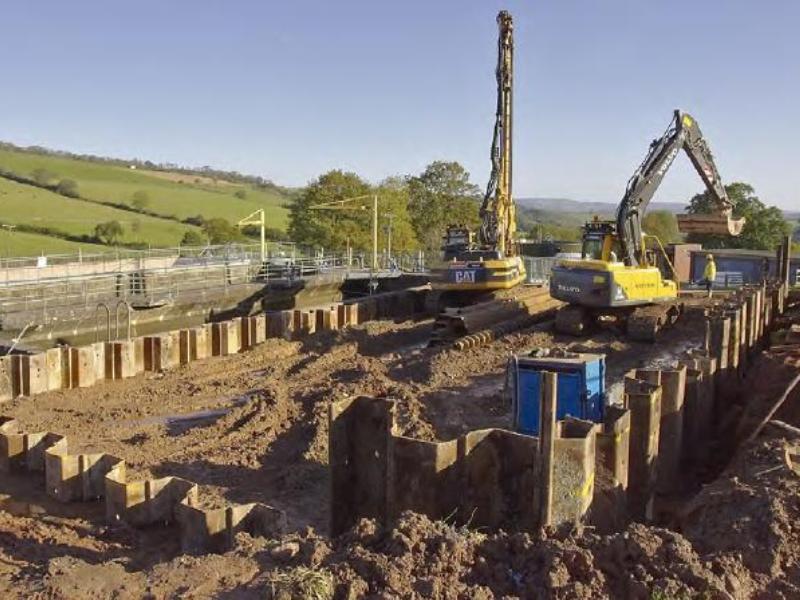 DAWSON-WAM have installed a temporary cofferdam at Maundown Water Treatment Works (Maundown WTW) in Somerset as a preparatory step in the Maundown WTW reconstruction programme by Wessex Water.

The purpose of the cofferdam is to enable the construction of new dirty washwater balance tanks, required as part of the modernisation to this facility which was outlined in Wessex Water’s 2005-10 business plan.

Additional support for the retained load was provided by a twin-fix 610 x 305mm universal beam installed at 1m below ground level. Piles, which were pre-augured using a double drive auger unit, are being installed into the stiff local clay with a 330 Caterpiller fitted with a 60t vibro hammer.

Maundown WTW serves a community of 200,000 in central Somerset and is operated by Wessex Water which has recently been ranked the country’s top water and sewerage company by industry regulator Ofwat. The existing works were built in the 1960s and extended in the early 1970s.

The water treatment plant was rebuilt, with the support of the Drinking Water Inspectorate, to increase the number of treatment stages at the plant including the use of dissolved air flotation and granular activated carbon flotation methods.

These improvements were implemented to address taste and odour issues resulting from increased levels of algal bloom which have arisen in reservoir raw waters due to changed weather patterns.