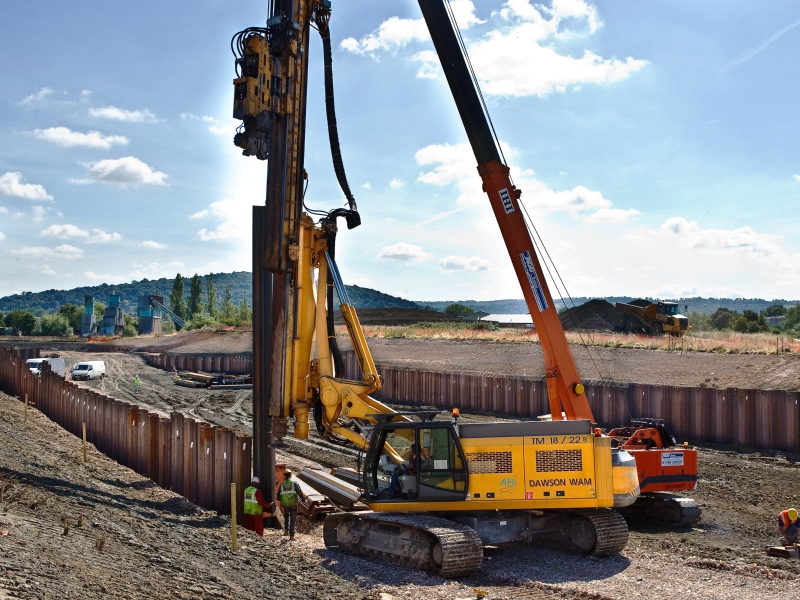 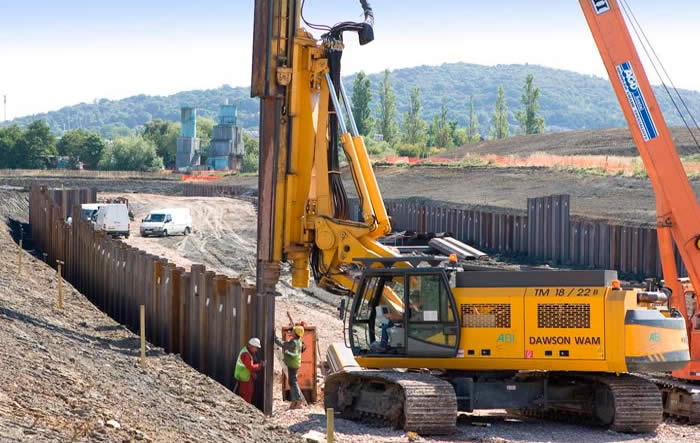 Using a new sheet piling section, DAWSON-WAM installed approximately 900 new section steel sheet piles for the main canal walls of the 600m length diversion to the Gloucester and Sharpness canal which was built as part of the £12m Gloucester South West Bypass construction.

The works cut off the awkward double bend in the canal two miles south of Gloucester.

The new channel was required so that when the new road bridge across it is opened to traffic, there would be a reasonable length of bypass to accommodate car stacking before the next road junction.

It also now allows the highway to have a reasonable gradient between the road level and the platform of the new bridge, which requires headroom clearance for certain boats to be able to pass underneath. The new channel was designed to be the same width and depth as the original canal.

The sheet piles utilised were supplied by Arcelor and were their new AU23 750mm wide sections. It was the first time these had been deployed in the UK.

Installation into the very stiff Lias clays and mudstone soils of this region was carried out using one of DAWSON-WAM's fleet of powerful telescopic 22m Leader rigs enabling the canal walls to be constructed in less than four weeks.

DAWSON-WAM also installed tie bars and anchors to provide support for the canal walls to withstand the necessary internal forces which arose when the canal was filled.

The system, designed by DAWSON-WAM, required 180nr tie-bar locations spaced on 4.5m centres along the each length of the two new sheet piled walls.

The outer earth banks were levelled at each point and 3nr sheet piles were installed to a depth of 4.5m below final tow path level as the outer anchor. A trench was excavated on the towpath side of the wall to a depth of 1.5m for the installation of a 660mm x 229mm universal beam waling bar to provide lateral strength to the canal walls.

50mm diameter threaded steel tie-bars approximately 10.5m in length, pass horizontally through the canal walls - through the waling bar to the sheet piled anchor, and are secured with standard steel plates and locking nuts.

To prevent leakage through the canal wall, tie-bars were positioned in the in-pan of the sheet pile rather than the out-pan.

Banked slopes and trenches were back filled and raised to the water level to form the tow-path / foot path alongside the finished canal.