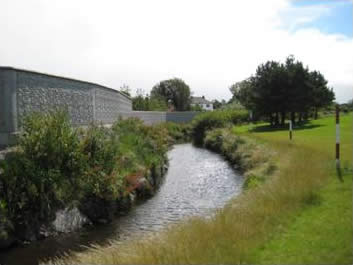 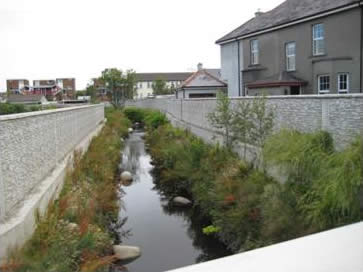 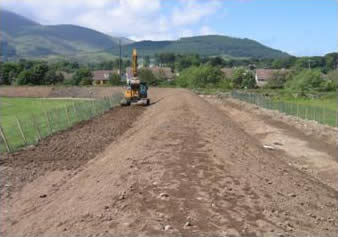 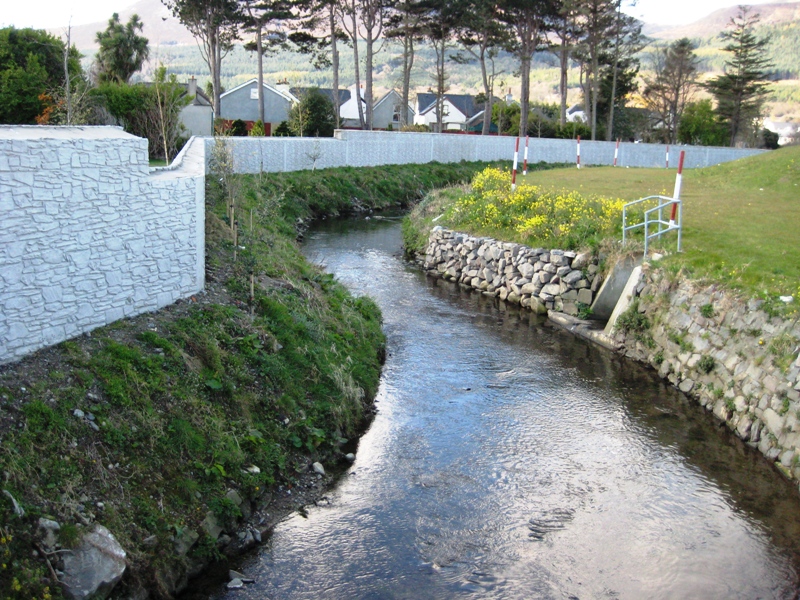 The contract was for the provision of a flood alleviation scheme for the lower reaches of the Burren River where it flows through an urban area of Newcastle, Co.Down, and extending for some 2km above it's confluence with the Shimna River. This area has a history of flooding problems, statistically causing damage to some 800 public and private properties.

The Burren River is an exceptional fish breeding river and all works involving the existing river bed and banks had to be approved by the local fishery interests and Environment and Heritage Service.

Construction of steel sheet pile core walls and river walls along both sides of a 2,000m length of the Burren River from its confluence with the Shimna River upstream; this involved some 3,200 tonnes of sheet piling. In a two separate 150m sections of the core wall where high rock levels were encountered sheet piling was replaced with 450mm diameter secant piling augured into the rock.

Construction of some 3,000m3 of reinforced concrete was completed on the scheme consisting of an insitu capping beam, varying from 800x800mm deep to 800x1000mm deep, to the total length of the sheet piled walls and some 1,280 m of flood defence walls up to 2.5 m high with a feature finish mimicking a coursed stone wall.

Construction of some 2,400m of clay flood embankments, generally using spoil from the existing embankments;

Construction of some 430m of concrete block boundary walls up to 2 m high;

Provision of new or replacement back drainage pipework, consisting of some 3,600 m of PVC drainage pipe up to 300mm diameter, together with associated manholes and outfalls through the new sheet pile walls;

In addition to the civil works, extensive accommodation works had to be carried out for some 37 Nr. Riparians, both private and public, whose properties were affected by the new flood alleviation works. This ranged from differing decorative finishes to the landward side of the floodwalls to extensive landscaping and replanting of private gardens.

The contract was constrained by a number of restrictions which strictly controlled when the works, particularly piling operations, could be carried out. These included the fish breeding season, primary school terms, sports field operations, etc.

Despite these restrictions, the main civil works were completed some 2 months ahead of programme and Practical Completion achieved 3 weeks early.