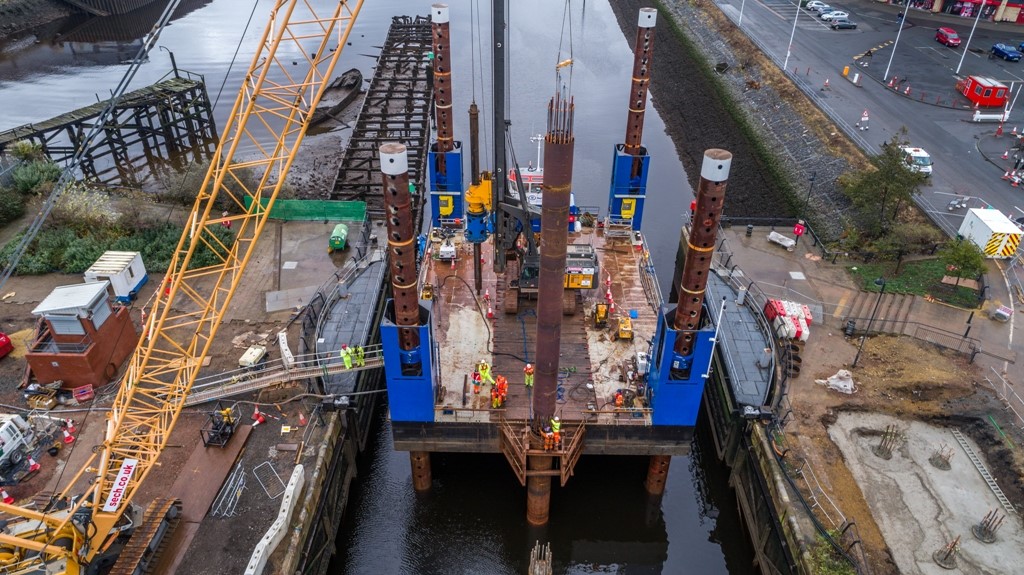 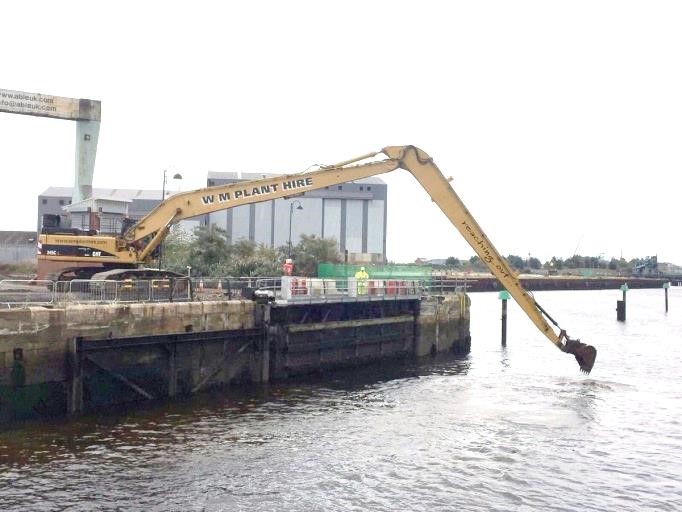 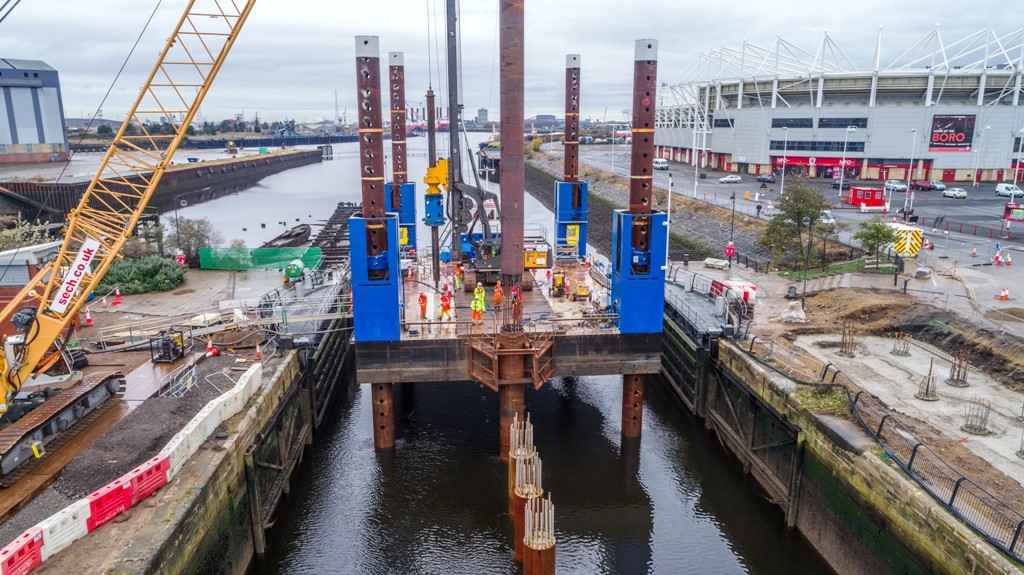 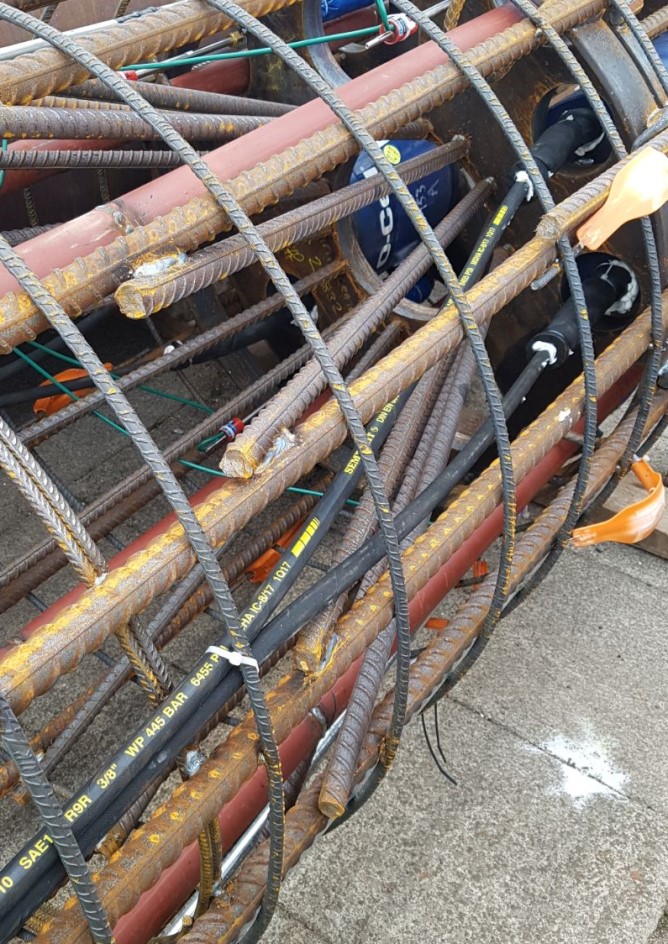 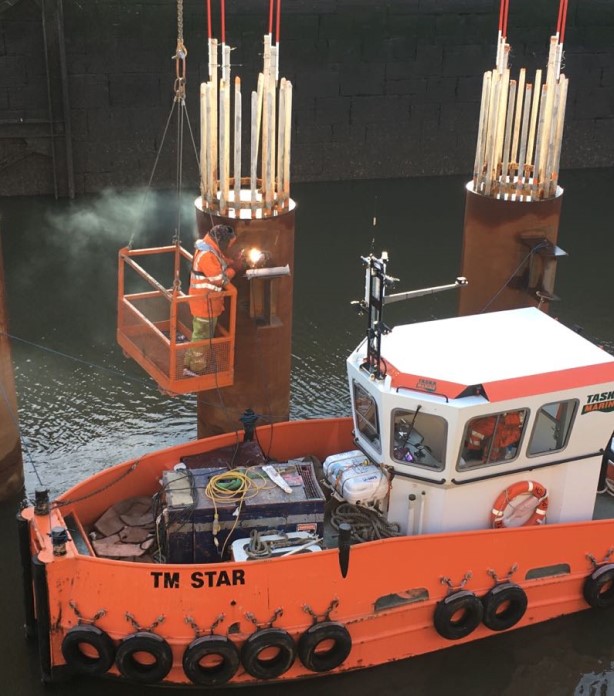 DAWSON-WAM was contracted by Balfour Beatty to design and construct both land and marine piles to carry a new three lane lift up road bridge in Middlesbrough. The bridge will boost development at Middlehaven Dock and will also provide access to the north of the Riverside Stadium, the home of Middlesbrough Football Club.

As part of the development, a new road route will take motorists, cyclists and pedestrians from the nearby A66 across the dock and past Anish Kapoor’s Temenos sculpture

The new crossing will replace an existing footbridge installed after the removal of an earlier swing bridge by the Teesside Development Corporation. The proposals also replace previous plans for a £4.5m swing bridge at the site.

The design team was concerned with the challenging ground conditions, and the requirement to penetrate through the existing dock base and behind the dock walls with piles. DAWSON-WAM were invited to assist in the risk reduction meetings and were able to propose installation methods which removed much of the risk associated with the project.

The piling required 5nr marine piles of 1200mm dia to be installed through the dock base for a central pier structure and 10nr land base piles of 900mm diameter to be installed behind the dock wall to the south of the dock entrance. Piles were designed to carry typical loadings associated with a working bridge but also had to be design to carry the considerable eccentricical loadings associated with the construction of the bridge with precast pier and bridge beam units.

Due to the significant risk of man made obstructions behind the northern dock wall DAWSON-WAM decided to use rotary bored techniques to install the piles. A temporary casing was installed down and into the underlying mudstone and Kelly bar auger was used to form a bore to a depth of between 23 and 26m below ground level. Steel reinforcing was installed and concrete was tremmied from bottom to top to construct the pile. The temporary casings were then removed. Piles were design and constructed to carry 3,900kN in axial load.

The marine piling was a much more challenging requirement than the land based piles due to the location of the piles 12m from the dock edge and due to the requirement of the piles to penetrate through the dock base and into the underlying mudstone. The dock base itself, which was constructed in the 1800s, was formed of bridge and concrete with timber and steel insets for the dock gate mechanisms.

As part of the risk reduction measures a dive survey was completed at the proposed pile locations with divers. One of the pile positions was found to be located centrally on a 600mm deep step in the base of the dock. Due to the risk of the pile being kicked off position due to the step DAWSON-WAM removed this step to form a level platform with a long reach excavator fitter with an underwater rock hammer with intermittent diver inspections.

Access to the pile locations was always going to be challenging as they were 12m from the dock edge and within a tidal zone with a 5m range. Furthermore a 100t capacity piling rig was deemed to be the best system to overcome the difficult drilling conditions. As a result DAWSON-WAM opted for a 300t deck capacity jackup barge supplied by Red 7 Marine to provide a safe and stable working platform at a maintained level. A workboat for moving the Jackup between positions and a full time safety boat were also employed.

To install the piles DAWSON-WAM utilised a Delmag RH28 rotary piling rig which was based on the Jackup and supported by a 160t Leibherr crawler crane which was situated behind the North Dock Wall.

1300mm diameter twin wall casings were installed through the 2.5m thick dock base and 2m into the underlying mudstone. From this point a rotary auger was used to advance a 1200mm bore to  -24mOD. Piles were installed with the bore charged with water to allow assist supporting the sides of the bore. At this point the steel reinforcing was installed with a permanent steel liner 16m long, 1200mm diameter and 12mm thick steel over the upper portion of the pile. This unique method was utilised as a former to support the concrete within the upper section of the pile as it cured.

A heavy duty steel gate manufactured in one of DAWSON-WAM’s workshops was fixed to the side of the Jackup barge to control the positional tolerance of the pile during curing. Allows 75mm in positional tolerance the actual deviation for design position was less than 30mm over all the piles.

A relatively onerous testing regime was required by ARUP due to the risks associated with the project. Cross hole sonic logging was completed on 60% of the piles, with all 5nr marine piles tested. Static load testing was completed to both the land and the marine piles with the maximum settlement at 1.5 times SWL of 3.5mm.

Due to the position of the marine piles it was extremely difficult to perform a conventional static test utilising reaction piles or cantiledge. The Fugro O-Cell test method was therefore adopted which places hydraulic jacks at a prescribe position within the pile to be test. These jacks are stressed inducing load into the pile, effectively breaking it in two, and the movement and load distribution was monitored to a load of 1.5 times the SWL.

As part of the works Balfour Beatty required significant fabrication to temporarily support the precast units. DAWSON-WAM installed support brackets fixed to the steel pile liner as well as guides to ensure positional accuracy of the precast units.