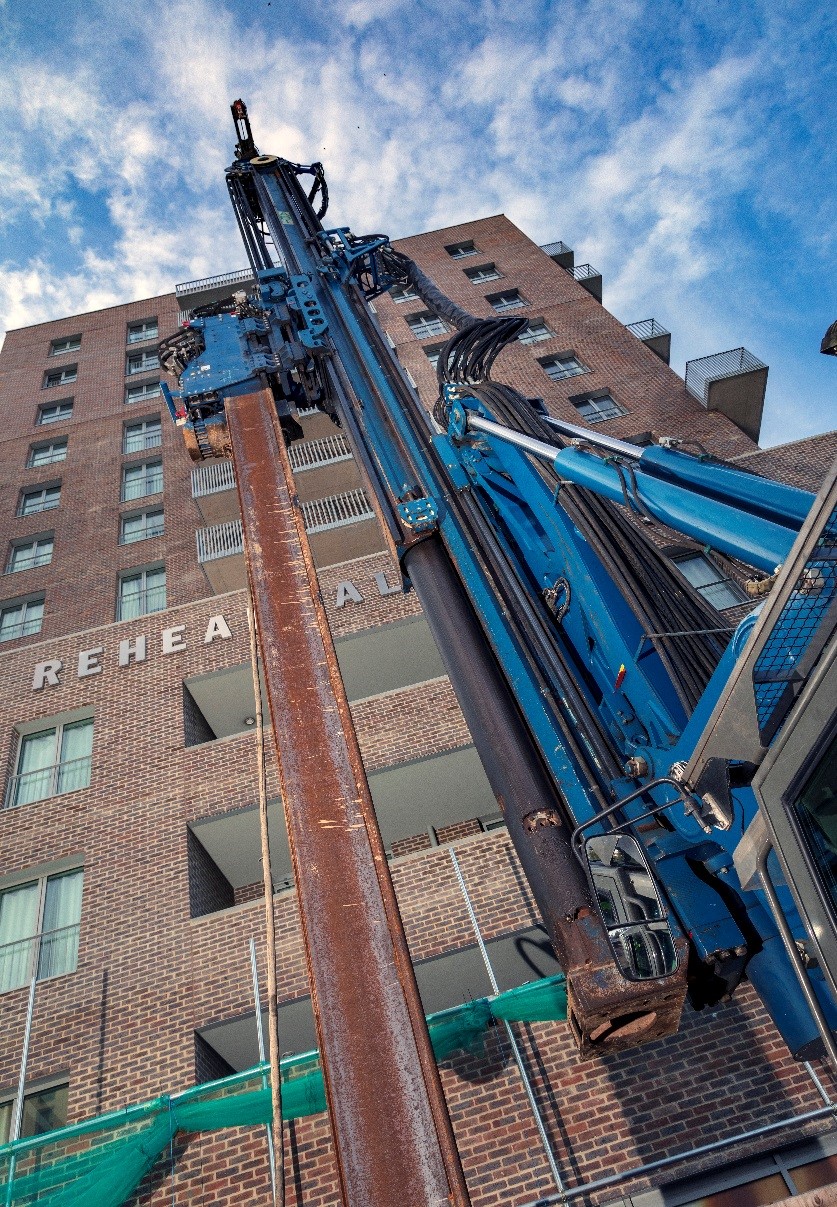 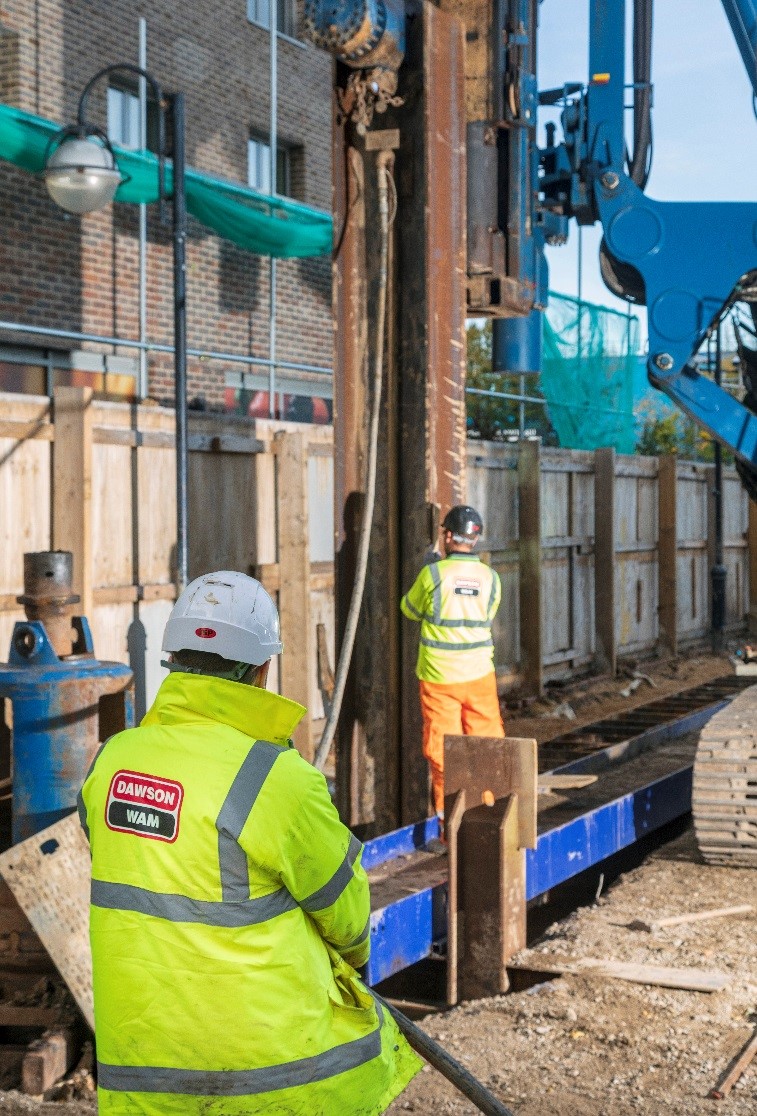 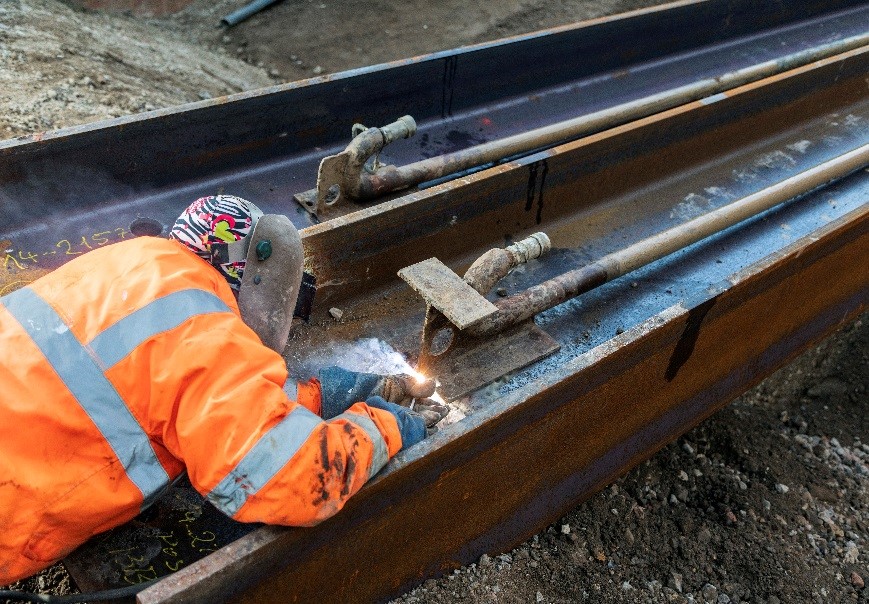 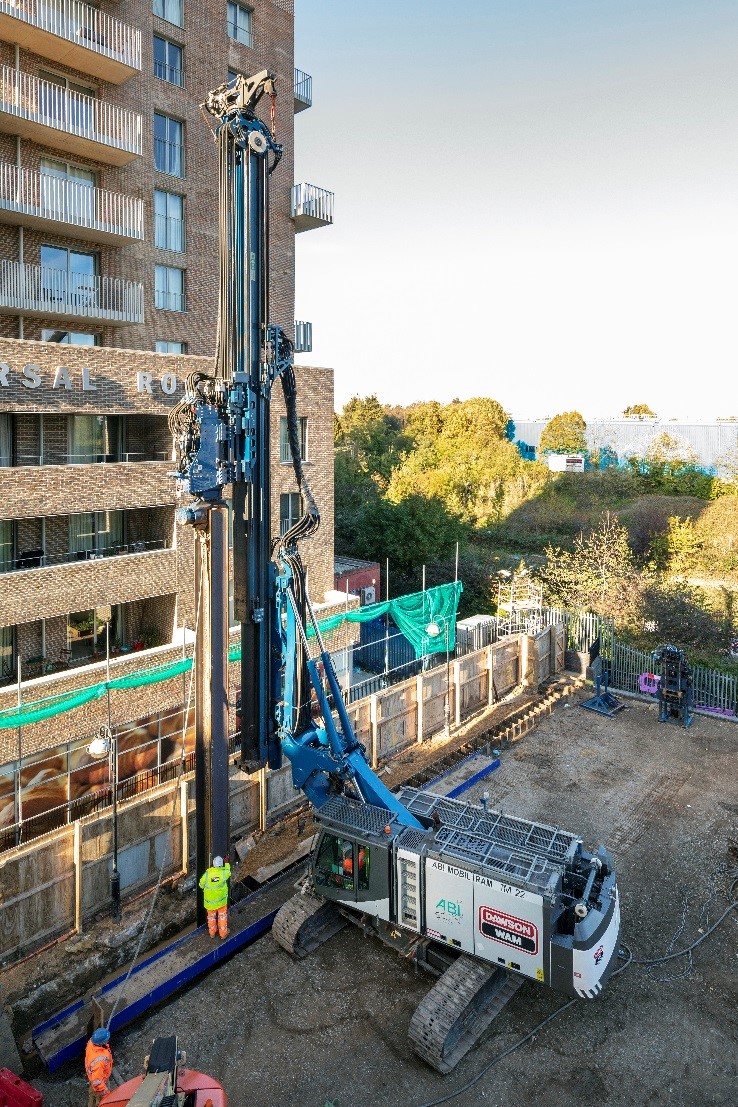 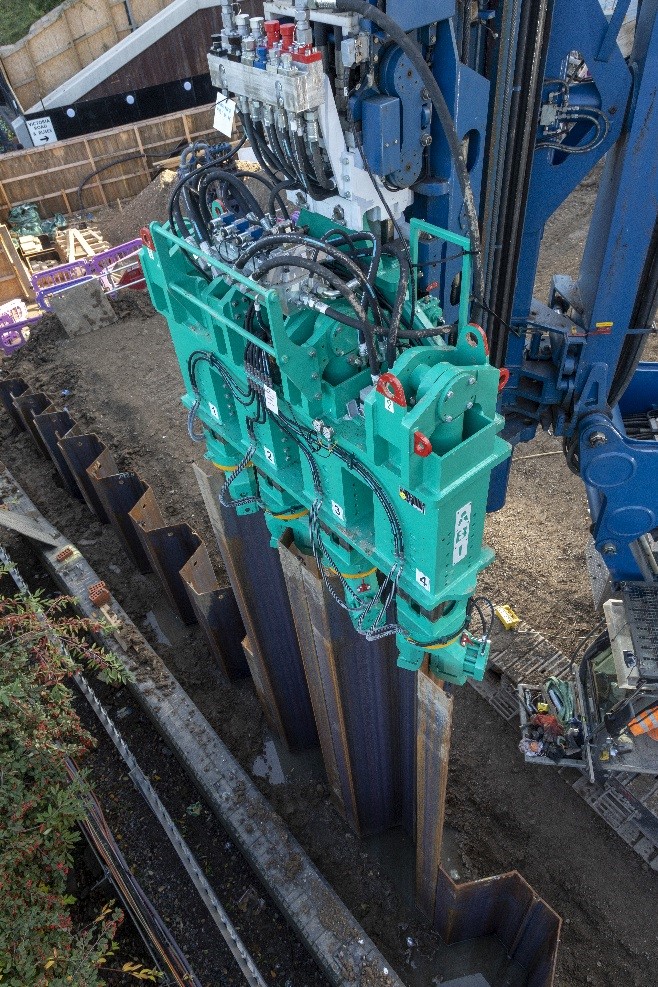 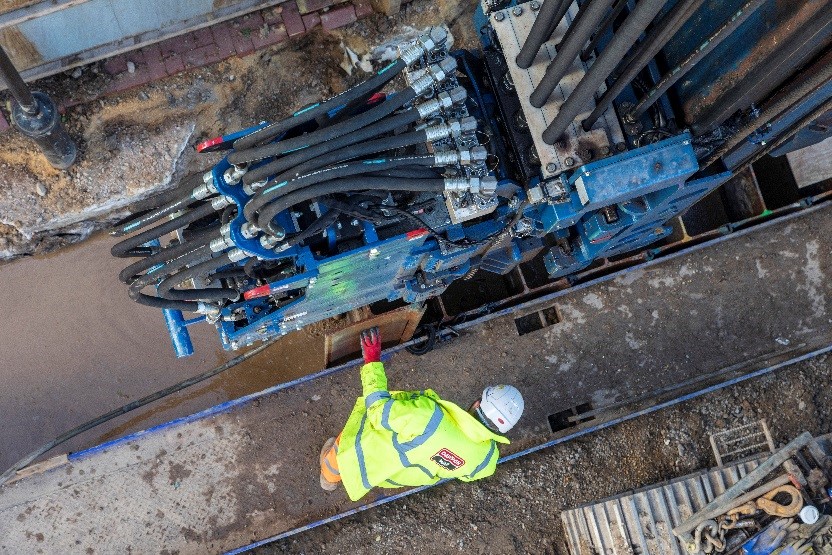 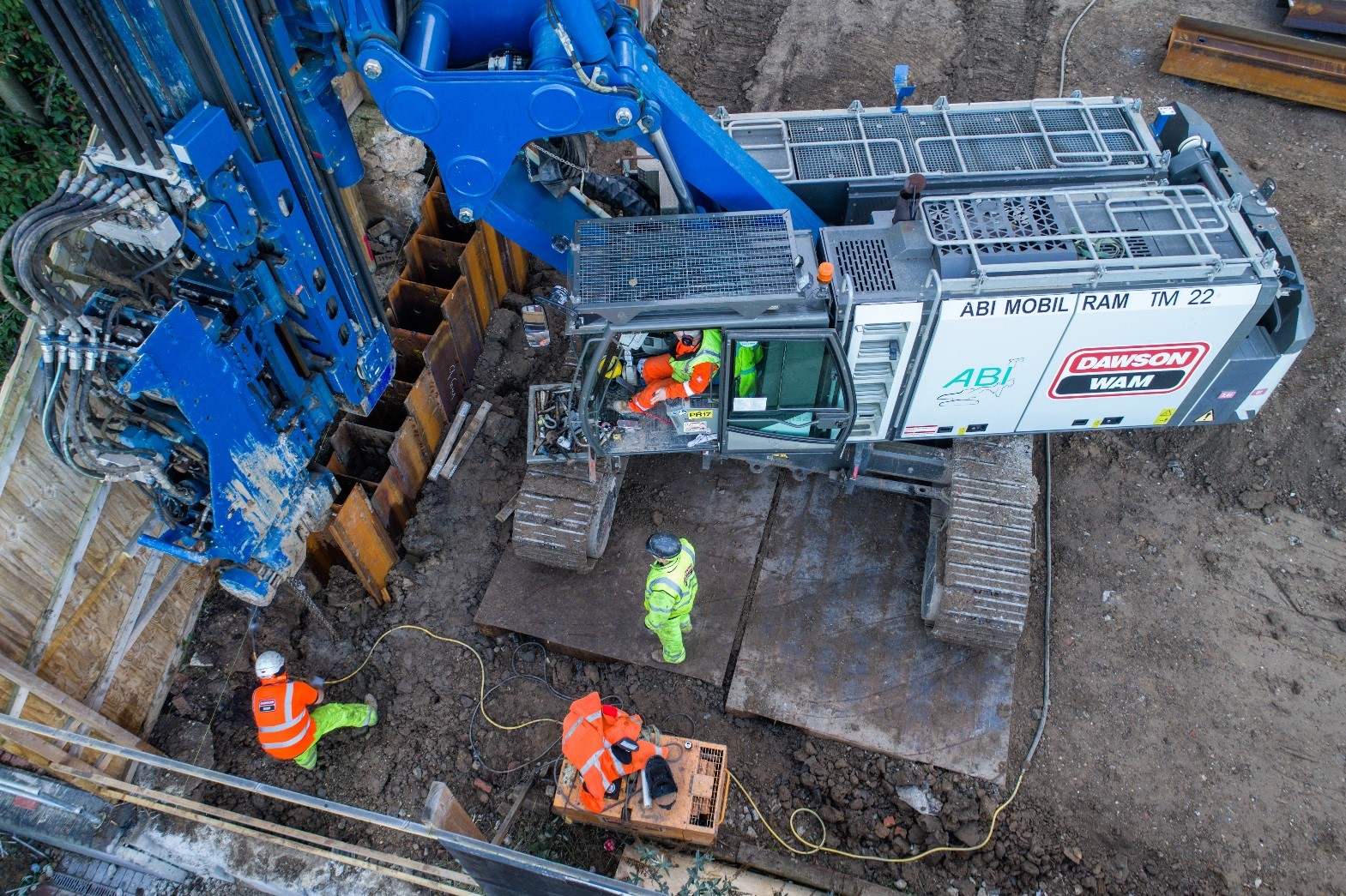 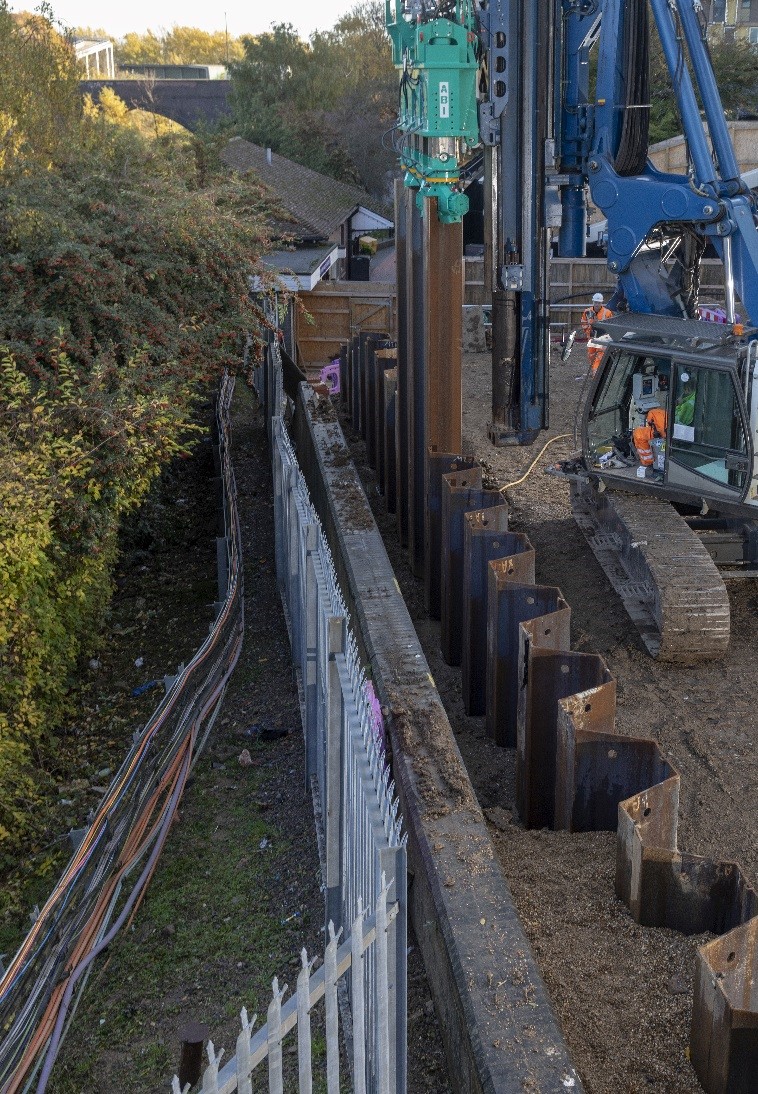 This project has been driven by vast amounts of urban regeneration which are taking places across the borough of Ealing.  One of the issues this regeneration highlighted was the lack of adequate access to North Acton Underground Station. Pedestrian access to the station was via poorly lit alleyways and made no allowance for people requiring level access or mobility assistance. The new scheme will provide well-lit walkways, improved access for the public as well as an open space and focal point for use by the community as a whole.

The works were required to be carried out over two phases to ensure access was maintained at all times to the adjacent tube station on the London Underground Central Line. This would later allow temporary access to be diverted across to the newly installed steps along Wall A while the existing access was upgraded. A second visit would later be required to install the remaining HZ beams opposite wall A to form Wall B.

While Wall A on the first visit was in close proximity to a neighbouring hotel beside the site, Wall B was even closer at less than three meters away. The building adjacent to Wall B was a residential Block consisting of 9 stories. For this reason, it was very sensitive and the client was insistent that the works on the scheme to improve the vicinity around these residents should not impact them during construction.

The clients request was made all the more difficult by the underlying ground conditions consisting of made ground which had been remediated after the sites former use as a filling station and stiff London clay beneath this at high level. As a result, Dawson Wam opted to use a combination of techniques on this scheme, made possible by the use of our versatile ABI TM-22’s.

This machine has the capabilities to operate a range of different attachments. In total three different attachments would be required on this scheme including a VDW 1050 to pre-auger the stiff underlying clays in Cased Auger mode. It was decided to pre-auger the line of all piles before installation. The piles were then pitched and driven using an MRZ 30VV High frequency low resonance vibratory Hammer with minimal vibration before finally using a HPZ 635-700 Hydro press unit to press the piles to level using vibration less methods.

The scheme was further complicated by the steel sections used in the design of Walls A & B. the designers had selected a HZ680 LT M wall. However, it is not possible for these sections to be installed using a press as they will not fit within the jaws of a pile press.

For this reason, it was decided to adopt the use of Water Jetting for the installation of the HZ sections. This technique involves adding a temporary steel lance (pipe) to the pan of the pile. This is then connected via a high-pressure hydraulic hose to a jetting pump. Once the pile is clutched into the previous pile and levelled the pile is pressed to the ground. Once this is complete the pump is started and delivers up to 320 litres per minute of water down the steel tube to the toe of the pile. This dramatically reduces the amount of energy required to drive the piles to level, as the water lubricates the pile and displaces the material temporarily during the drive.

Once the pile is at the required level the jetting lance is disconnected and removed from the pile, ready to be prepared for the next installation.

The final stage of the works was to install Wall C. This wall was formed of AZ36-700 piles, this wall is adjacent to the perimeter of the London Underground Central line. For this reason, it was possible to utilise the HPZ press and install these piles using vibrationless methods. The line was first pre-augered to loosen the material to depth, the piles were then pitched as before using the 30VV hammer and stood vertical using no vibration. Once all of the piles were stood vertical the HPZ press was attached to the rig and used to put the piles to the required level.

During the works to Wall C London Underground had a full-time site based representative. This was to ensure there was no risk or incidents with the cable trays running adjacent to the works. Strict movement limits had been agreed on the allowable movement of both the fence and cable trays. These were monitored on a daily basis by a surveying consultant.

As expected, and as a result of the methods chosen to complete these works and the wide range of applications available through use of our modern equipment there have been no issues or complaints. The client has since been able to progress unhindered with the works for the upgraded public square due to be opened to the public during Summer 2019.