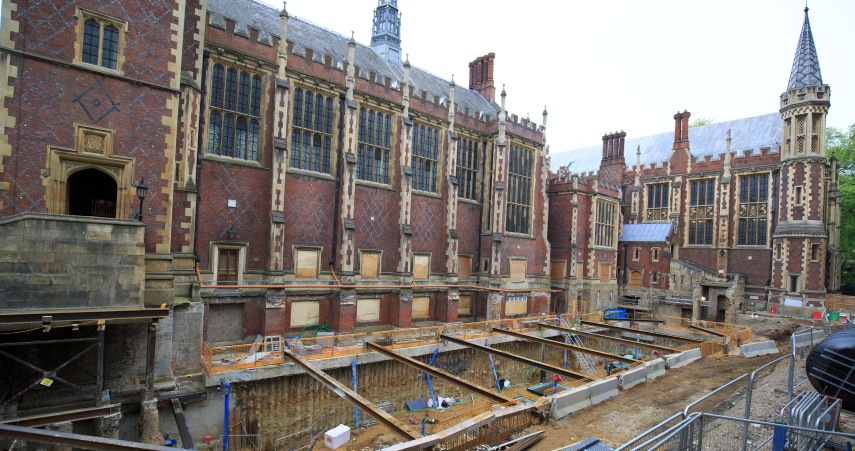 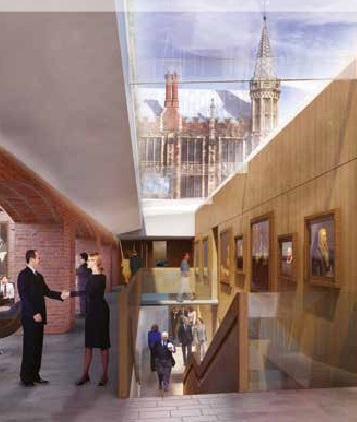 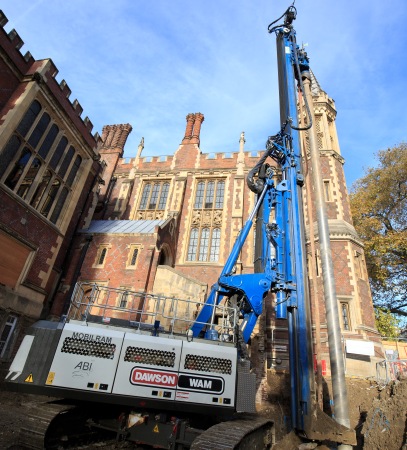 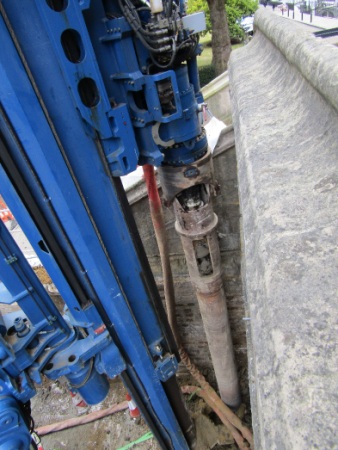 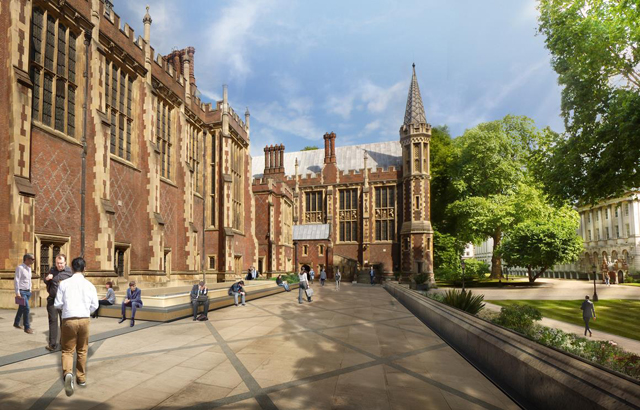 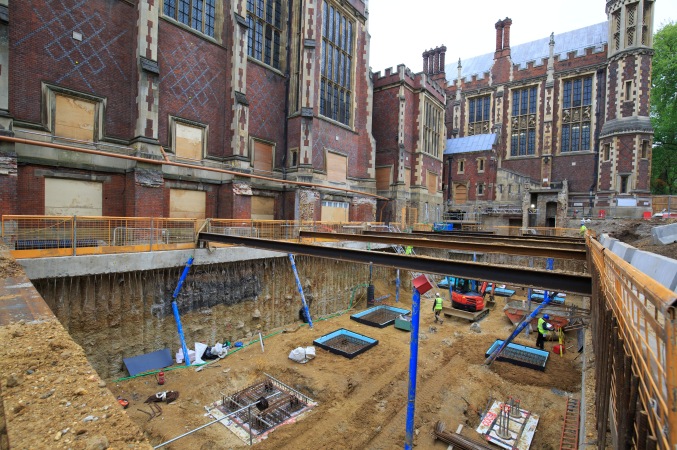 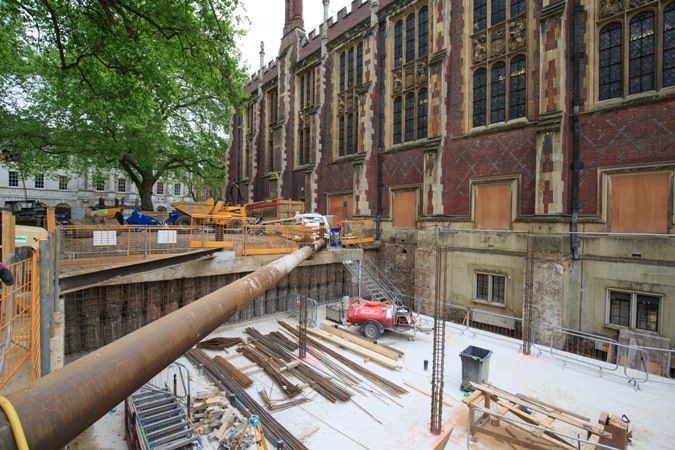 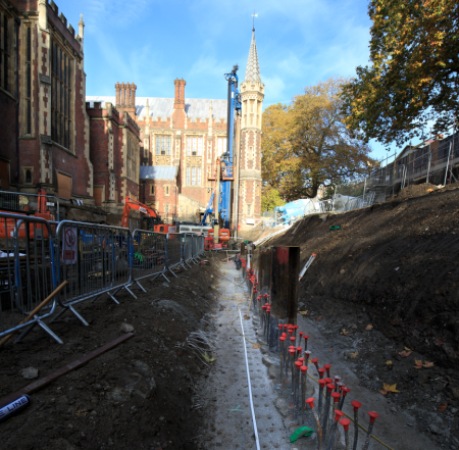 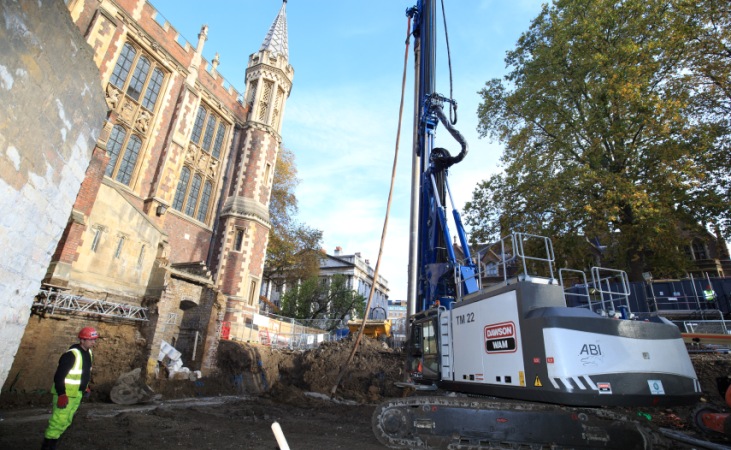 DAWSON-WAM were contracted by Graham Construction to construct two new basements within their prestigious Lincolns Inn Project. The development involved constructing one contiguous and one secant basement as well as load bearing piles within the grounds of the Inn to extend the Library and the East Terrace to create new teaching spaces.

The first work to be completed upon mobilisation was the secant wall for the East Terrace. A reduced dig had been carried out at this location to allow the extension to be completely buried so as not to be competing with the fabric of the existing Great Hall Building. The site footprint at this location was very tight with a single lane access road meaning only one delivery could access the site at a time. This required very stringent logistics management with other trades to ensure the program was kept. The Great Hall and Library, as well as a sandstone staircase are Grade II listed and bounded the basement on three sides. The remaining area was taken with the site offices and mature overhanging hardwood trees. This meant very strict environmental policies had to be in place to protect against spills and ground contamination from concrete and oils etc.

The new structure was founded on load bearing piles which were completed from the same level as the secant wall which aided the program allowing all piles to be completed in one visit. The contractor was then free to excavate to the formation level approximately 5m below the capping beam level.

All of the works in the East Terrace were completed using DAWSON-WAM’s Cased CFA system. The auger diameter in this location was 450mm with depths up to 19m. This system was of huge benefit here as the works were to be carried out in close proximity to other trades who also had works to carry out within the basement area and were following behind with civils works such as capping beams. It was most beneficial however with regard to the proximity of the existing structures. All of which were Grade II Listed structures with great historical and architectural significance. The whole project had been designed around improving and complimenting these structures some of which date back to 1422. As a result, the client was continuously monitoring vibration and noise as there are also quite a number of residents living close by also. Luckily as a result of the versatility of Dawson-Wam’s TM-22 piling rigs we were able to complete all of the piles within the strict tolerances with regard to vibrations and noise. It was also possible to pile close to the existing structures due to the line of the gearbox on the TM-22 not extending beyond the housing for the casing, something very few machines can achieve.

As the surrounding structures were of such importance, it was decided that the propping for the basement would be best suited above the capping beam level. This would allow the floor slab to be poured and cured before the props would have to be removed. This ensures there is minimal risk of movement or settlement within the existing structure when the props are removed. It also means it is possible to remove the temporary propping easily and safely once the floor slab is poured.

The second location was the Library extension. The was an L-Shaped contiguous wall which utilised the existing library wall and the underpinned boundary wall to retain the remaining sides of the excavation. As with the East Terrace extension the works were in a very restricted area. The site access was along one side as well as the public road on another while the Library which is a Grade II listed building was on the remaining side. To make the works even more complex this location was also restricted with overhanging trees. To protect the trees, it was decided to complete some of the Contig piling using a restricted height Klemm 709 Piling rig.

In total 40 linear meters of contiguous piles 450mm diameter were installed as well as 43 No. 350mm CFA Load Bearing Piles with depths of up to 21m. These were installed using DAWSON-WAM’s TM-22 leader rig system. As these piles were not cased the dual auger motor drives were locked together to give drilling force. In this case, as with the east terrace the reinforcement cages were pushed to the required level to simplify the breaking down for the civils team during the excavation phase. This meant that as the dig progressed there was no need to bring in crews to break down the piles they were simply removed by the excavator, which aided the clients program.