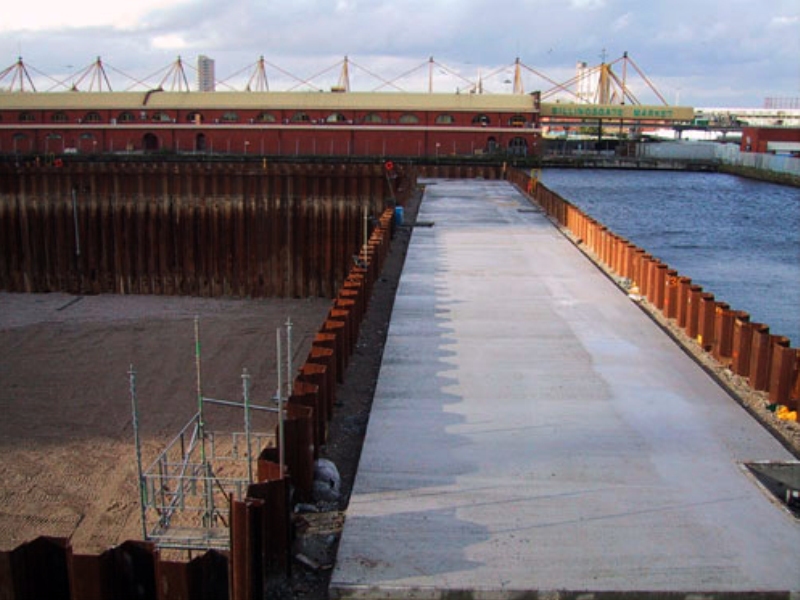 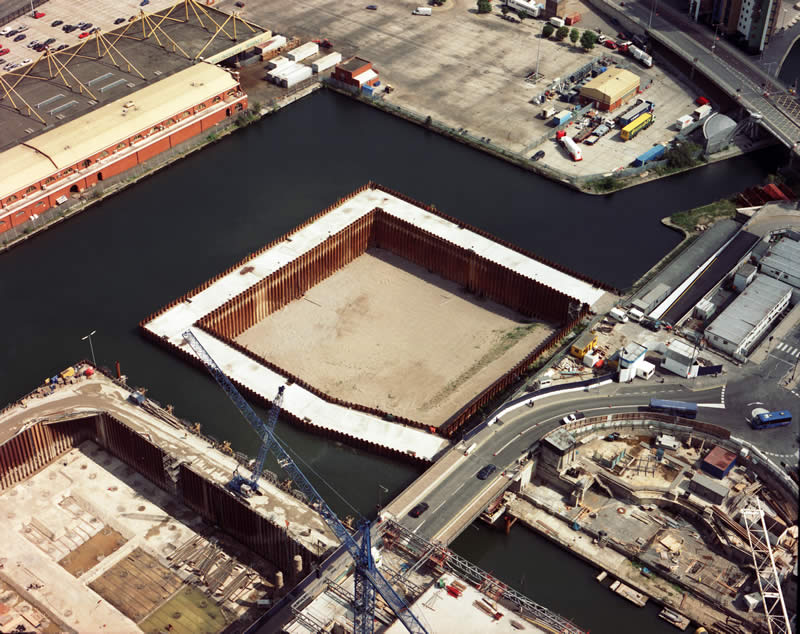 The contract was under Canary Wharf Contractors Design & Construct Conditions and was designed in conjunction with Halcrows.

The provision and driving of some 11,000 square metres of 22 to 25 metre long Larssen LX25 and average depth of some 11 metres below dock bed level.

Piling was carried out using crawler cranes and suspended hammers mounted on a jack-leg barge. The bulk of the piling was driven using a DCP 6500 and IHC S90 impact hammers.

Delivery and storage of piles was arranged using river barges and tugs as required. Access was limited for piling barges, which had to be assembled on site from Flexiflote, Uniflote Construction.

Once the two sheet pile walls had been driven, each cell was desilted and divers installed 90mm and 56mm dia. steel tie rods at upper and lower levels below dock water level.

The void between the twin walls was then filled with some 30,000 cubic metres of stone fill, delivered and off-loaded by ship, and the water contained within the cofferdam pumped out.

After the dewatering of the cofferdam the reclaimed area was dredged of 15,000 m3 of contaminated silt, granular material and dock bed obstructions. Perimeter drainage and 500 mm thick stone mattress were then installed for the foundation piling rigs.

Due to an extensive redesign of the south wall instigated by a change in the requirements of the client and implementation of client options, the works overran its original agreed budget by some 27% and required substantial extensions of time.

The main obstructions encountered were thought to be the remains of old barges as the area had been historically used as a boat graveyard.

Extensive sound screening mounted on floating pontoons and barges had to be used throughout the piling operation to reduce noise pollution in the surrounding area.

Ancillary works at the end of the contract involved the supply and driving in adjacent dock of 1067 mm dia. fender piles, 23 m long, for floating craft.