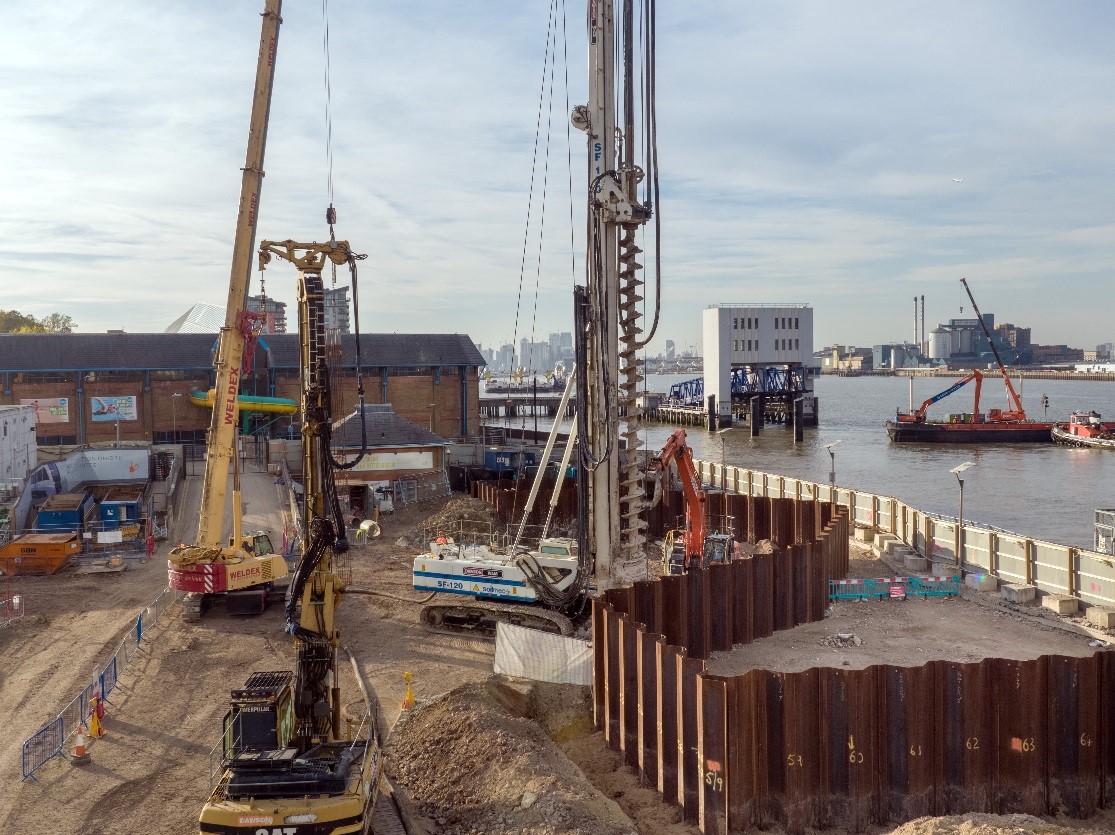 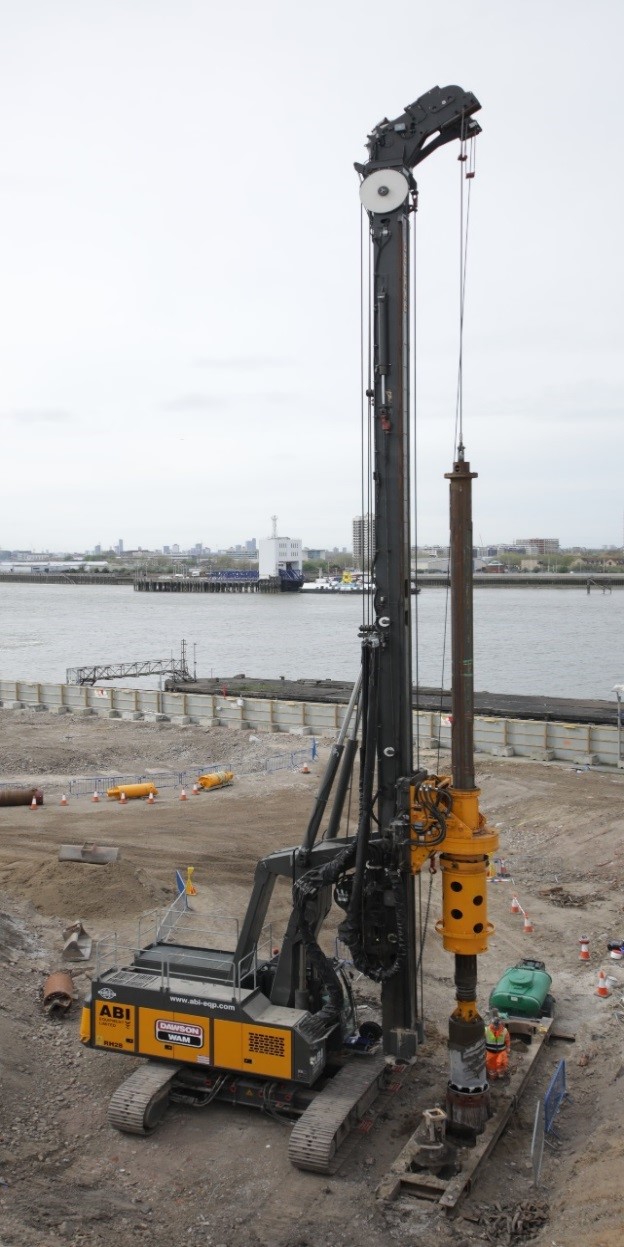 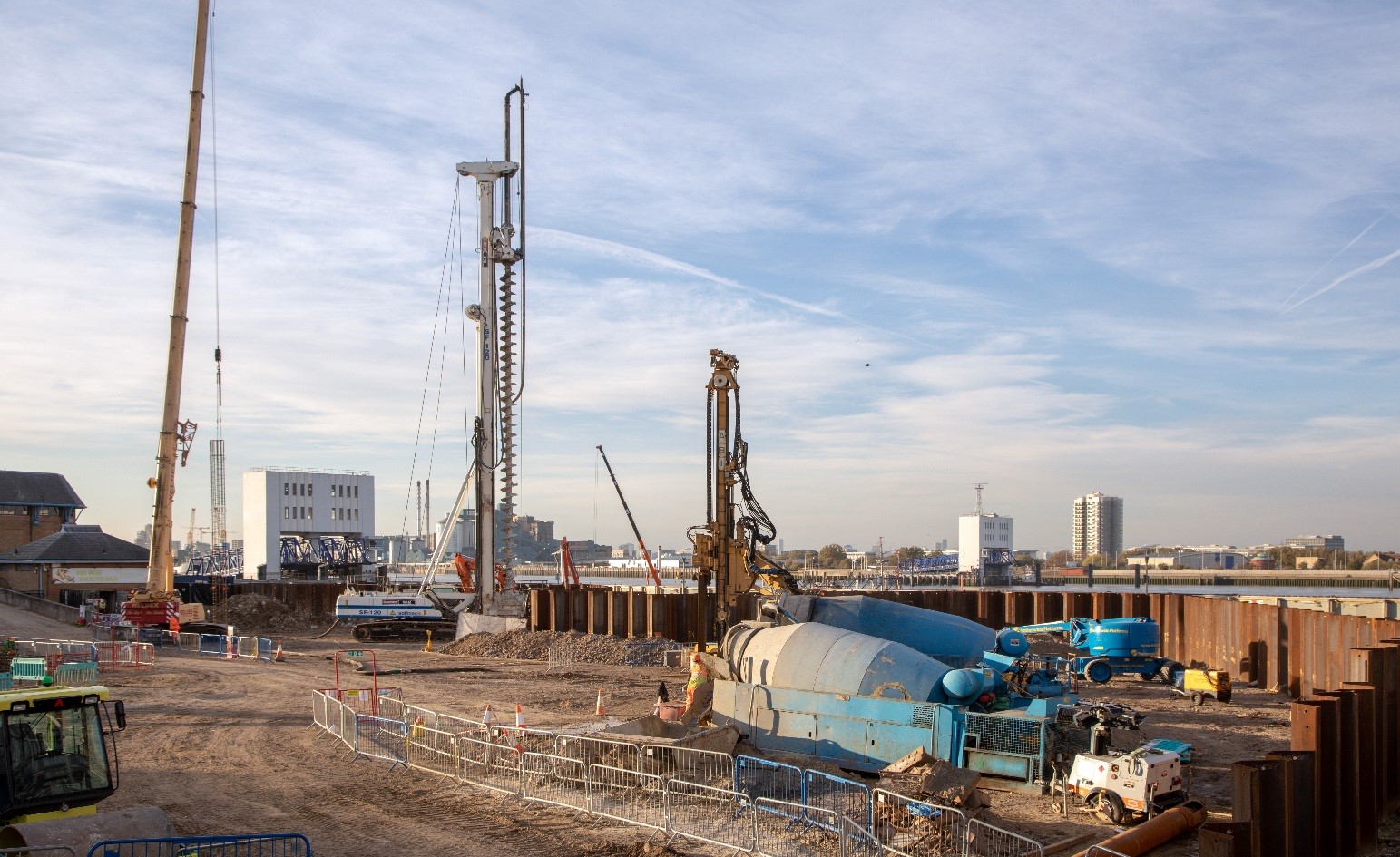 DAWSON-WAM was contracted by Berkeley Homes East Thames to design and construct the load bearing piles for Phase Nine of there Royal Arsenal Riverside development in Woolwich. This project involved the use of numerous different techniques all which could be provided by Dawson Wam

The development is located on the site of the former Woolwich Coal Fired Power Station built in 1893. The power station has long since been demolished, however the old structure had left many challenges behind for the new development of the site.

Whilst the power station had been demolished in the 1970’s, the foundations and structure below the current car park level had not been removed at the time of demolition. Little or no information existed on the true nature or position of obstructions. It was considered impracticable to remove all of these for piling works so a strategy was developed to attempt to core out these obstructions to a depth of up to 11mtrs into the underlying natural ground and then backfill with granular material prior to piling proper being carried out unhindered.

The obstructions required removal to allow for the installation of the sheet piled wall which formed the basement and provided a flood defence from the adjacent River Thames. Following on from this the bearing piles which would support the four 18 storey residential blocks involved in the development would be installed. To remove these obstructions Dawson Wam employed three rotary type Delmag Rigs.

To remove the obstructions around the 346 Lm perimeter length, a specialist 880mm diameter overlapping guide was designed and fabricated in house. This allowed a secant pattern to be followed by the drilling rigs ensuring no obstructions were missed. When each of the 530 holes were drilled out, they were then backfilled with imported material to ensure the sheetpiles could be installed unobstructed.

Once the perimeter wall was completed works commenced on the load bearing pile positions. These were drilled out again using the Delmag rigs at 1000mm diameter. These piles had initially being designed as a mix of 1200mm and 900mm diameter piles. However, as a value engineering option it was decided to redesign these piles at 900mm diameter. This meant the piles were leaner and working more efficiently, whilst also   reducing the amount of obstruction removal required and therefore coring time.

Once the coring works had advanced sufficiently and with the sheet pile wall installed and with the coring works ongoing in different locations; it was possible to mobilise the fifth rig to site. This is the machine required for the load bearing piles, our powerful Soilmec SF120. This machine was rigged for 32mtr long CFA piles at 900mm diameter. the first operation for this machine was installing a preliminary test pile and anchor piles. This work was carried out at an early stage to verify the design before the main body of the works began.

The preliminary test was installed to 32mtrs through the made ground upper layer and Thanet sands founding in dense chalk at depth. The pile was subsequently loaded to 14MN (1400 Tonnes) for a prolonged period. The test performed extremely well and was well within the allowable settlement criteria for such a test. Thus, verifying the design assumptions made.

In all 205 load bearing piles were installed consisting of depths ranging up to 32mtrs. All pile cages were debonded and then plunged to the required depth using an additional leader service rig. This reduced the amount of concrete breakdown required for the civils contractor. This reduces the risks of hand arm vibration for operatives as the top section of the piles breaks easier from the lack of bonded reinforcement.

All loadbearing piles were installed successfully and within tolerance following the removal of obstructions and the client, Berkeley Homes East Thames, have been very satisfied with all works completed on this scheme. The scheme presented many challenges with drilling on each load bearing pile on two occasions, however thanks to our in-house management team the works have been successful and the obstruction removal, Sheetpiling and load bearing works tied together seamlessly.

To gain this saving Dawson Wam’s designers were able to redesign these lightly loaded piles as Vibro Concrete Columns. (VCC’s) These were laid out and installed 450 Nr. in grids ranging to depths of up to 6mtrs or refusal upon encountering obstructions. These piles were then dynamically tested to ensure sound capacities were achieved.

To install these piles one or our powerful multi-functional TM-22 machines was used. A specialist displacement tube was manufactured and installed on the piling rig. This fits within the jaws of its 30VV High Frequency low resonance piling hammer. The tube is then driven into the ground to the depth required before being extracted while pumping concrete through the attachment. This forms a displacement pile in each location.

Whilst on site Dawson Wam was also employed to design and install a temporary works sheetpile cofferdam. This was to facilitate the installation of a structure core by others. This was also installed using our TM-22 machine this had the benefit of saving time and cost for BHET as one machine was able to complete numerous disciplines of piling on site.

In total Dawson Wam drilled out around 800 obstructions and installed 655 load bearing piles using a combination of 6 different piling rigs machines in a period of 11 months.