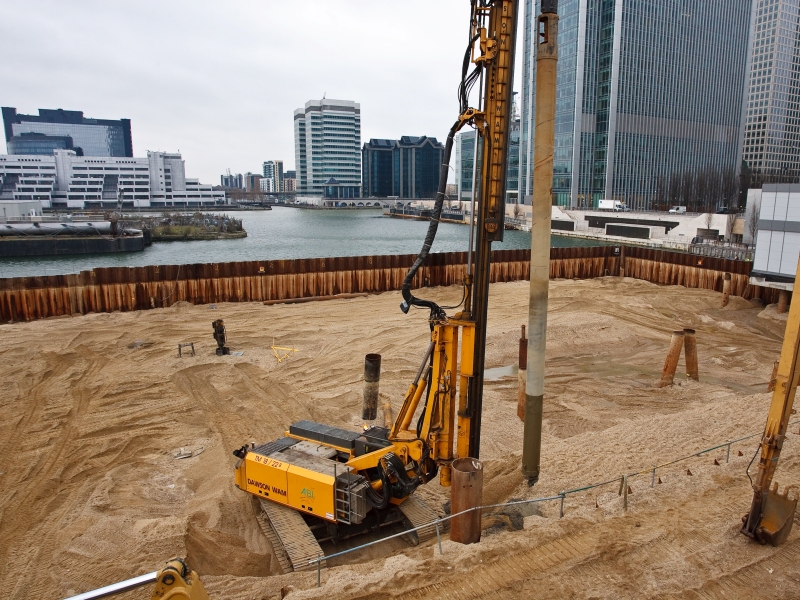 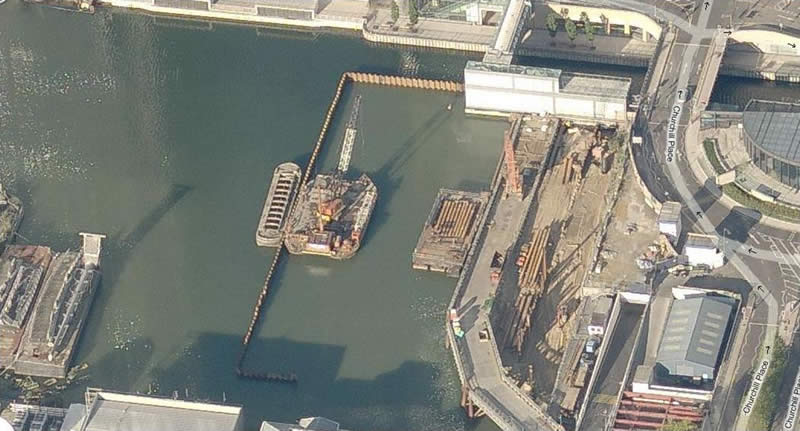 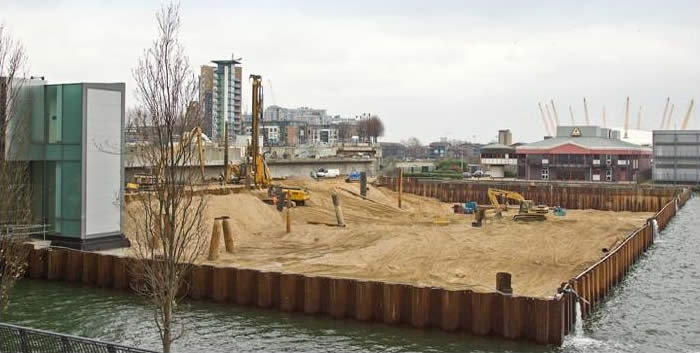 Canary Wharf has a long history of temporary cofferdam construction, a number of which were previously installed and subsequently removed by DAWSON-WAM. BP3/4 is the most recent development in Canary Wharf and has been designed and constructed by DAWSON-WAM’s team to add value by constructing a single skin cofferdam.

The installation of 280 linear metres of single sheet piled wall to for a 80 by 60m cofferdam. The piles used consisted mainly of AZ25/AZ26 piles up to 18m long and recycled LX25 sheet piles from the existing cofferdams working in cantilever. Halcrow estimated the control of sheet pile deflection using finite element analysis.

The perimeter wall was installed from Floating plant and when 80% complete, dredging works were commenced to remove approximately 10,000m3 of silt to -5m OD. To minimise the environmental impact, dredged silt was not transported off site for landfill, but instead moved to within the dock and deposited in a small underwater retaining cofferdam constructed by DAWSON-WAM as an addition to the contract. This filled cofferdam was subsequently planted with reed beds planted to provide Environmental mitigation measures to satisfy EA/Statutory requirements.

As the dredging was completed some 50,000m3 of aggregate was removed from existing Cofferdams to be removed to allow backfill to 0m OD before dewatering. Recycled Aggregate was moved predominantly by specialised pumping equipment which was able to transport the saturated aggregate some 300m. The cofferdam was then closed by sheet piling in a second visit at the eastern end and the sand filling completed by underwater profiling and compaction to the required levels

Continuous observation and monitoring of deflection was maintained while dewatering to compare with original computer models and to provide confidence and confirmation of the predicted deflections to avoid entering any danger zone.

The cofferdam, once dry, had a piling platform installed and was handed over to Canary Wharf Contractors to allow permanent construction works to commence.

An existing temporary access bridge was also removed within the BP4 footprint.